Home  /  Pastries   /  History of the Croquembouche 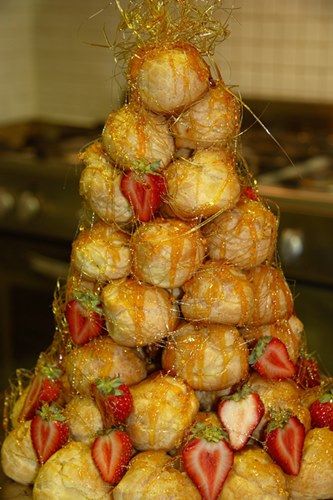 History of the Croquembouche

A croquembouche or in French- croquenbouche is a type of pièce montée and is generally served at baptisms and weddings as well as at first communions. This high cone made of profiteroles (choux that is filled with delicious pastry cream), is sometimes also dipped in chocolate & bound with caramel.

Typically, this entire creation is elaborately decorated with fine-spun threads of caramel, flowers, sugared almonds, chocolate and even ribbons. At times the cone may also be covered with macaroons. Its name is derived from the 2 French words “croquet” en “bouche”, which means ‘crunch in the mouth’. The Croquembouche is designed to be the centrepiece at a table. Outside of France, it is used to add a dash of flair to any event.

Croquembouche- A Peek into its History

The croquembouche has a very ancient lineage and illustrates the extensive history of these fine pastries in the country. A variation of the croquembouche, which is a very fanciful and edible architectural creation, was also seen displayed on the tables of the royals and noblemen in France, way back in the 1500’s.

Ingredients such as the cream puffs that are used in this creations date back to this period. Antoine Careme (1783-1833), the French chef seems to have invented the actual version that we see today, only in the late 1700’s. It was at this time that it became very popularly used as a wedding cake. He was one of the most-famous French chefs of his time and this dessert was popularized by him.

Careme had also studied architecture and had once stated that architecture was a very noble art and that pasty was the epitome of architecture. Apart from the croquembouche, he also created Gothic Towers, Persian pavilions, Turkish Mosques and a number of other pieces- all made from choux puffs. At that point of time, the Turkish fez was a very commonly-used shape. By the 19th century, these stunning architectural pieces started spiralling upwards & out of control. With the dawn of the 20th century, it was clear that the conical structure was the triumphant survivor.

This French dessert is quite a complex one- It is a piece montee made completely of profiteroles, also called choux puffs. These are filled with crème patissiere or chantilly and can be flavored with any liquer of your choice. The piece sits on a nougatine/croquant base and is a high conical-shaped structure. Caramel is used to bound the choux pastry together and the decoration of spun sugar, caramel, almonds, fruits and flowers makes the entire creation a delight for the eyes.

The decoration that goes on top will be based on the occasion- and so if it’s a wedding there may be sugared bride & groom figurines, a monogram, flowers, marzipan roses or a heart made out of nougatine. Croquenbouche means – “Crunch in the Mouth”. In French- piece montee means “mounted piece”- it is essentially a decoartive confectionery creation that is meant to be used as a centerpice at a table at any special event.

Croquant/ nougatione is mix of caramel & finely-chopped almonds. Choux pastry is a very versatile medium and can be used to shape a number of forms apart from the traditional eclairs or round puffs. Imaginative and creative bakers use this to create a variety of architectural food creations and a number of other desserts are also made from choux pastry.

As you can see, this elaborate French dessert is not an easy one to make. It requires creativity, a skilled and practiced hand and a lot of partience and care to make. This is exactly why the croquenbouche tend to be an expensive French dessert and is generally ordered only at very special events. The price of the croquenbouche can vary greately, depending on where you order it from and who is making it, the ingredients used and of course, the number of profiteroles that have been used to make it. The most popular serving is 3 profiteroles per person.

You will also find a number of variations of the croquembouche as bakers in Australia let their creativity run free. Today, you will find a lot of fresh fruits and flowers being used to decorate the creation. Another trend is that the structures are also now getting taller and taller and are starting to look even more impressive. Regardles of how you look at it- the croquenbouche is a piece de reisitance!!