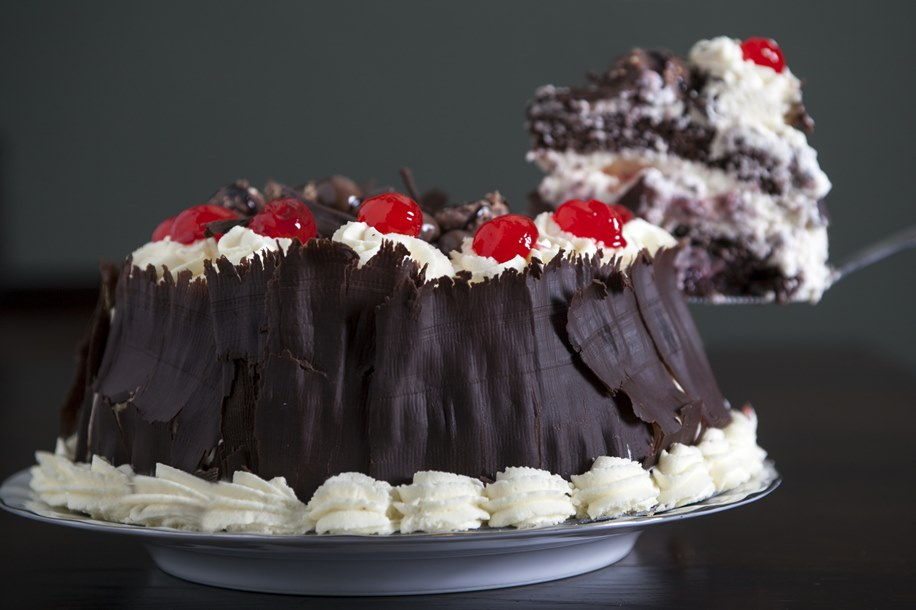 While black forest cake recipes can vary to a great extent, in most instances, a Black Forest Cherry Torte or the Schwarzwälder Kirschtorte (as it’s called in Germany) is a Gateau-style chocolate cake or a sponge cake that is completely soaked with Kirschwasser (cherry schnapps). It’s also filed with whipped cream and cherries and will be filled and topped with chocolate shavings. Traditionally in Germany, cherry schnapps is a mandatory ingredient in the black forest cake, which can’t be legally sold if it’s made without it.

Southern Germany (Der Schwarzwald) has a region called the Black Forest; this is known for its deliciously sour Morello cherries as well as for Kirsch/Kirschwasser (double-distilled and clear cherry brandy that is made from these cherries). Therefore it’s not surprising that the desserts that are made with Kirsch and the cherries are a very integral part of the region’s cuisine. The German name for the cake is Schwarzwälderkirschtorte- the Black Forest Cherry Torte (the word torte is German for cake).

This chocolate cake has many layers of Kirsch-soaked sour morello cherries and whipped cream. The additional whipped cream, maraschino cherries & chocolate curls/shavings makes it a truly rich dessert. The black forest cake layers will be soaked in the Kirsch syrup (alternatively, rum or brandy can be used). Australian recipes omit these spirits in order to make this cake much more family-friendly. Today, the “Black Forest Gateau” or the “Black Forest Cherry Cake” is probably one of the most-famous German desserts.

This is quite interesting simply because the inspiration for it might just have originated in Switzerland. The cherry firewater or kirschwasser on which the current day cake is based, originally came from the land that lies around many central Swiss lakes. Even today, this region is very famous for it; and is home to world-famous brands such as Dettling and Etter. These spirits made their way to the Rhine Valley as well as the Black Forest. This is where it began being manufactured up until the mid to the late- 1800’s. Slowly but surely, the popularity of the Black Forest cake spread across Europe, the U.S and Australia. Here is a quick & basic Black Forest Cake recipe:

Today, the Black Forest cake is a very popular dessert across the country and you will find variants of it in different cake shops and French patisseries.