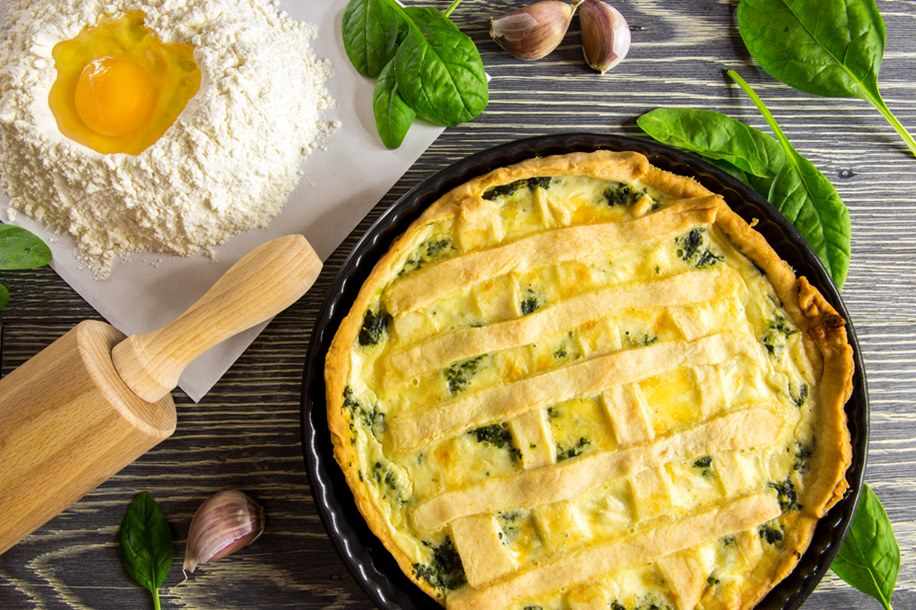 Today, quiche is recognised as a classic dish of the French Cuisine, but its origins lie in Germany. It was first made in Lothringen the medieval kingdom that was under German rule. Later, it was the French that named their classic dish Lorraine. The actual word “Quiche” comes from the German word “kuchen” which means cake.

The ‘quiche Lorraine’ was originally an open pie that had a filling consisting made of egg & cream custard with a generous portion of smoked bacon. Cheese found its way into the quiche only much later. If you add onions to this particular recipe, you get quiche Alsacienne. Originally, the bottom crust was made from bread dough; however that evolved into a puff pastry crust or short-crust.

The popularity of this dish spread in England only post WWII after which it spread to the rest of the world including Australia. Since most of its ingredients are primarily vegetarian, it was considered to be a not-so-macho dish and that’s where the saying “Real Men Don’t Eat Quiche” came from. That of course are more of Quiche-lore and today this delicious dish is made with broccoli, seafood (primarily shellfish), mushrooms or ham.

It can be served just as an entrée, or for lunch. It makes for a wholesome breakfast or quick evening snack. The key to making a great quiche is to aim for a flaky crust and very creamy custard filling which holds a cut edge. Making the custard creamy is about getting the ratio of eggs to milk right. If you use too much of milk, the custard just won’t set well and if there is very little, it will get baked and toughen.

Most of the quiche recipes that are a variation of the traditional Quiche Lorraine are very simple. This is primarily because they came about at a time when people didn’t really have large amounts of money to buy different ingredients. That’s exactly why the Quiche Lorraine was typically made with a number of basic ingredients that people could easily find in villages and farms.

Just as the bread dough made way for a pâte brisée or even a pie pastry, the basic recipe has seen many variations over time; people adapted its bases to their own taste, culture & habits. Today, a number of salty tarts are also called quiches and the ones with seafood like shellfish or shrimp or slow cooked onions (caramelized), asparagus, leeks etc are particularly delicious. Here is a basic and simple Quiche recipe.

Setting up the Quiche Lorraine in the Tin

Enjoy this classic Quiche hot or cold. Once you are confident about making this one, get creative and add different ingredients in the Quiche mix.