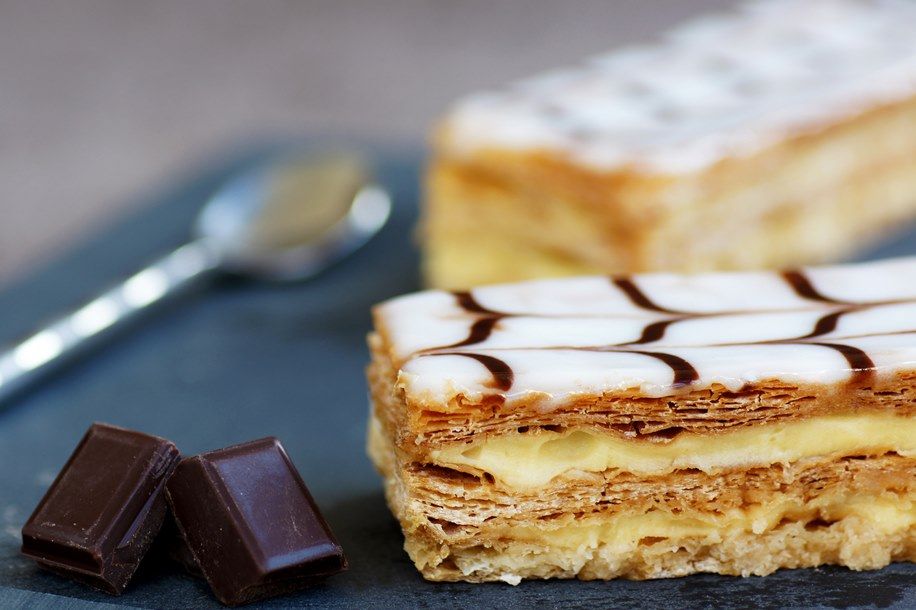 What is a Mille-Feuille Cake?

Literally, Mille-Feuille translates into “A thousand leaves”. This refers to the multitude of layers that a puff pastry has. Traditionally, Mille-Feuilles are made up of 3 layers of puff pastry (pâte feuilletée). This is then alternated with 2 layers of smooth pastry cream (crème pâtissière). In some cases, this may be substituted with jam or cream. The topmost layer of the pastry is then dusted carefully with confectioner’s sugar.

At times, it may have pastry crumbs, cocoa or pulverised Almonds or other seeds, while at others, the top may have fondant or glazing that is alternated with brown chocolate and white icing stripes, which will then be combed. Today, there are many savoury Mille-Feuille that have spinach & cheese as well as a number of other savoury fillings. This gives it an unexpected twist, but one that is surprising and perfectly pleasing to the palate.

To date, the real origin of the Mille-Feuille Cake is a mystery. Some sources make mention of how it was François Pierre De La Varenne’s invention (1651) and was said to be later improved by Marie-Antoine Carême. Some stories state that this dessert was born in Naples. The “Neapolitan” adjective later evolved and was called “Napoleon” – this particular name became widespread right through the 1800’s in-sync with the Napoleonic wars.

In Hungary, the Mille-Feuille is known as Krémes. It’s a quivering quadrangle of delicious vanilla crème that is sandwiched between crisp Mille-Feuille layers & dusted with confectioner’s sugar. This dessert is stripped to the bare essentials. It’s generally consumed as a separate dish at tea-time, and not after a meal.

Russian literature makes mention of a cake called the Наполеон (Napoleon). References to this particular cake surface as early as the first-half of the 19th century. These names were born from the historic and romantic spirit of those times. The Наполеон became very popular from 1812; this was when Russia gained victory over Napoleon. In 1912, which was when the centennial celebrations were held, triangular-shaped pastries resembling the bicorne were sold. The numerous layers of this cake symbolized the La Grande Armée.

In Russia, the top of this cake is coated with pastry crumbs – these symbolize the snow that Russia has – this was what helped them defeat Napoleon. Later, this cake also became a very standard and popular dessert in the local cuisine. Today, the Napoleon continues to be one of the country’s most popular desserts; other Post-Soviet countries also continue making versions of this delicious dessert. Typically, it has much more layers than the famous French archetype, however, it’s of the same height.

This is filled with soft pastry cream & then garnished generously with powdered sugar and strawberries. In Italy, it’s called the mille foglie. Interestingly, there is also a savoury version which is made of a flaky and light puff pastry that has a pesto, cheese or spinach filling. One more major distinction in the Italian variant is that this dessert generally has layers of puff pastry that are alternated with sponge cake, cream and strawberries – which makes for a very pretty display.

In the U.K, a pastry will generally be called a cream slice or vanilla slice. However, on occasion, branded versions of these may be called Mille-Feuille or Napoleon.

Here in Australia, Mille-Feuille is also called a vanilla slice or custard slice and it uses a smooth gelein set crème pâtissière – it may also have a passionfruit icing. Victorians call these snot blocks.

Regardless of the country it’s made in and the form it takes, the Mille-Feuille has made a place for itself and its mark, in every continent across the globe. Doesn’t that say more than enough about how and why this dessert is so popular? If you haven’t tried a Mille-Feuille yet- simply walk into a patisserie near your home – you’re sure to find a version you like.